Aideen is Head of our Intellectual Property, Technology, Media and Data Privacy team.

Aideen is a highly experienced lawyer with particular expertise in the areas of Intellectual Property, Media and Entertainment, Technology and Data Privacy.

Aideen has an excellent reputation in the marketplace and is noted for her common sense, solutions-driven approach and for putting clients front and centre at all times.

Aideen is supported by a strong and dynamic team of talented lawyers, offering clients a truly best in class service.

Aideen is a regular speaker at conferences in Ireland and abroad, and is a Board member of Women in Film and Television Ireland.

Aideen previously worked as Legal Counsel for an internationally renowned animation studio and, subsequently, for a global media and telecoms company.  Aideen also worked for a number of years in a boutique law firm in London, where she trained and qualified.

Aideen has unique media and entertainment expertise, spanning across film and television production and financing and music contracts as well as television broadcasting arrangements

•   Advising on film and TV development, production and financing arrangements and drafting and negotiating all associated documentation 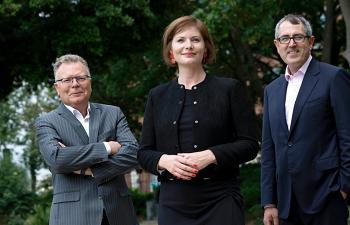 Aideen Burke joins leading corporate and commercial law firm LK Shields Solicitors as a Partner and their new Head of...